The University of Lusaka (UNILUS) is a modern private university established under the University Act No. 11 of 1999 repealed as the Higher Education Act No. 4 of 2013. The University commenced its operations in 2007, initially as Institute of Corporate Training and Research (ICTAR) and served as sorrage of the Masters Degree programmes offered by the Copperbelt University.

Today, the total number of UNILUS students has risen to over 7,000 from 71 students in 2007 when the University opened. The University has grown from strength to strength and now has over 1000 Master’s students and over 60 PhD students from various parts of the region. This is a great achievement for a private University that has only been in existence for less than 10 years.

To be a benchmark university for professional and academic training coupled with value adding research in the public and private sectors.

To be a benchmark university for professional and academic training coupled with value adding research in the public and private sectors.

Our Motto and Pride

The University of Lusaka prides itself in offering quality education. It is driven by its motto: “Passion for Quality Education: Our Driving Force”. As an academic institution of excellence the University offers practical oriented programmes which are driven by the present and future needs of Zambia, the region and the world. Our programmes are taught by a highly qualified creative and committed faculty, which combines enduring value of classroom education with practical skills gained through experience. Our faculty members are drawn from the world of academia, business, regional and international organizations to ensure that our students are engaged and equipped for successful careers and fulfilling lives. 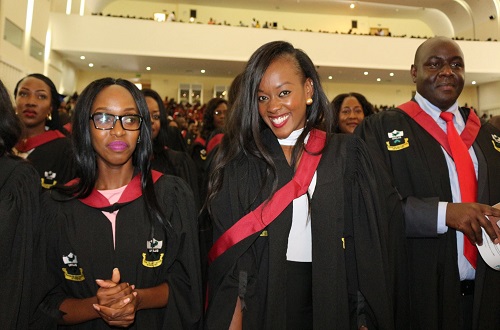 The University collaborates with a number of local, regional and international institutions including professional bodies, which include:

Coupled with various successes, the University held its 2nd Graduation ceremony on 3rd October 2014 and was graced by Dr Michael Gondwe, former Governor, Bank of Zambia. The graduation ceremony witnessed a total of 223 graduates of which 178 were Bachelor’s Degrees and 55 were Masters Degrees.

On the 3rd of October 2015, UNILUS, held its 3rd Graduation at the New Government Complex in Lusaka graced by Mr. Lumbwe, a representative of Dr. Lawrence S. Sikutwa, Group Executive Chairman of Lawence Sikutwa and Associates Limited (LSA). The graduation ceremony witnessed a total of 357 graduates of which 266 were Bachelor’s Degrees and 89 were Masters Degrees and 2 Phd Degrees.

African countries and Zambian in particular, has awakened to the need for quality education as the driving force for national and regional development. Due to this awakening there is unprecented demand for higher education in the nation and on the continent as a whole. With over 5,000 students enrolled in different fields of study, the University continues to receive overwhelming response to its programmes from within Zambia and beyond.

In order to meet this growing demand, the University has responded positively by ushering in plans to build a second campus to expand the level of student enrolment. The new campus to be located in Silverest along the Great East Road will provide state-of-the-art classrooms, lecture theatres, laboratories, administrative offices, student hostels and other student and public amenities. The construction is scheduled to commence once all logistics are in place.

Armed with such new expanded facilities, the University will introduce a number of new programmes especially in the science and technology related fields, to cater for the ever expanding industrial sectors. The key areas of focus will be agriculture, forestry, tourism, environmental management and computer technology.

The University of Lusaka is ready to respond to demand for skills and knowledge from the private and public sector. The University, therefore, continuously monitors and evaluates the demand from the public and private sector with a view to giving positive response thereto